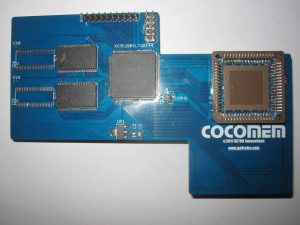 The TANDY Color Computer 3 married the elegance of the Motorola 6809 microprocessor with a simple but powerful memory management system breaking the 64kB barrier.  The original system offered expansion options up to 512kB, and the OS-9 operating system, among other applications, was enhanced to support the additional memory capacity.

Memory expansion could be performed by the end user, utilizing on-board connections for attachment, but the process was deceptively complex.  The end user must remove existing system RAM, slightly modify the system board by removing two electronic components (or rendering them non operational) before inserting the memory expansion unit.  This made it more difficult to return the unit to a stock configuration, for later use and/or sale.

In addition, the on-board expansion capabilities did not support expansion options greater than 512kB.  Over the years, 2 megabyte expansion solutions were developed and sold, requiring even more complex installation instructions (some required unsoldering the microprocessor, soldering in a socket, installing multiple circuit boards, possibly in addition to the steps required for the 512kB memory expansion.  Probably due to their complexity, these memory expansion solutions saw limited release, and the companies producing these solutions are no more.

Any new system must: 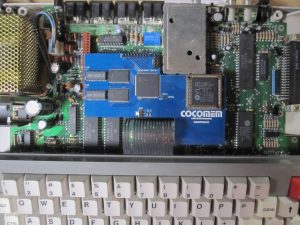 The CocoMEM memory expansion system for the Color Computer 3 comprises a single circuit board that plugs into the Coco3 GIME socket, with the GIME IC plugged into the CocoMEM circuit board.  This allows the circuit board to capture all signals needed for complete MMU functionality without requiring any irreversible modification to the Coco3.  To remove, simply remove CocoMEM and replace the GIME in the original socket.  Existing memory in the Coco3 can be left in place (feel free to remove if desired), and no capacitors must be clipped or otherwise removed.  No additional installation effort is required

CocoMEM units are currently in development, but will be sold in the  RETRO Innovations Online Store.

Units come with a 30 days return policy and 1 year warranty.

CocoMEM generates the bulk of its simplicity and power by residing in the GIME socket, which manages all traffic in the TANDY Color Computer 3.  All CPU, video, and RAM traffic runs through this single socket, and it is one of the very few ICs socketed on on the Coco3.  By intercepting all CPU and GIME traffic, the unit can alter the behavior of the system.

In a normal Coco3, the GIME generates both system clocks (E and Q), and manages all read access to RAM and part of the CPU’s write access to RAM.  The GIME accesses memory in 16 bit amounts, but presents an 8 bit data bus to memory.

CocoMEM intercepts GIME video data accesses, replicating the “16-to-8” marshalling login on the Coco3 motherboard to present appropriate data to the GIME

However, for CPU memory accesses, CocoMEM does not pass the data through the GIME, instead directing memory reads and writes directing to/from the CPU.

Video memory access occurs on the low half of the E cycle.  CPU access is performed on the high half of the E cycle.  On CocoMEM, the high half of the E cycle is further divided into 2 parts:  MMU access and data access.  In the first part of the high E cycle, the MMU address is presented on the address lines, the MMU RAM is enabled, and 16 bits of MMU data is latched into internal registers.  Then, on the second portion of the cycle, main RAM is enabled, the address lines change to reflect MMU and CPU address values, and the appropriate bank of RAM is interfaced with the CPU.