I just returned from a 2102 mile roundtrip excursion to the Vintage Computer Festival – East 9.1 at InfoAge in Wall Township, NJ.  Having been prevented from holding the show in 2013, the VCF-E organizers went all out for the 2014 show, supporting 2 exhibit halls and a separate speaker presentation tent.  I camped out in the vendor hall with our products on display. 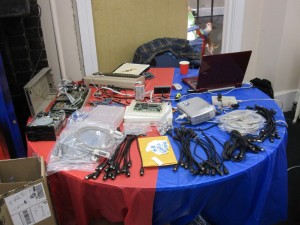 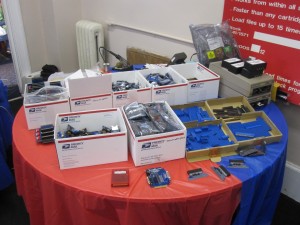 Though this is the first VCF-E I have attended, others remarked that this was the largest Expo they have held.  Thus, I am glad I was able to participate.  Unlike the other shows I have attended, VCF-E is much more structured.  Vendor tables are in their own room, the mornings are dedicated to speaker presentations and vendor sales, and the show floor does not open until the afternoon. Like many of the other more recent events, VCF-E is a 2-day event (Saturday and Sunday), and they even created a special VCF University event on the Friday before the main event.  I didn’t specifically count, but I was told 26 different exhibits were available for viewing in the 2 (yes, two) exhibit halls.

As you can see, I spruced up the vendor tables with some colorful tablecloths, and I brought a vintage CMD-era JiffyDOS wall poster (I purchased it from Click Here SW a few years back).  I brought all of the main store items, though I left some of the more esoteric adapters and such behind as they rarely sell. Sales were not overwhleming, but were satisfactory, especially in light of the fact that most of the day’s action revolved around the “consignment” tables.  I loved the consignment idea (VCF even accepts items for sale, with pricing information from the owners.  They then handle the financial aspects and man the sales table, taking 15% of the sales value).  One individual made over $1600 in sales through this solution.  I even joined in the rush, picking up a TRS80 MC-10 and a Compaq luggable.

Concerning exhibits, there were too many to mention.  I’m not that much into the 60-80’s DEC HW, but it was well represented at the show.  The early microcomputer options were on display, along with some early UNIX workstation options.  Closer to my world, Jeff Brace and Dan Roganti borrowed a number of uIEC/SD and 64NIC+ devices to present their “Artillery Duel”-like multi-player C64 game.  The graphics and such looked awesome, but they were plagued by code issues through the weekend.  They kept the loaner items in hopes of better luck during a June exhibition.  Elsewhere, Michau Pleban and Rob Clarke (An Brit from Switzerland, no joke) were on hand to show off a Commodore 264, a 232, a 116, a Max Machine, and their new cartridge for it called “MultiMax”.  Rob also tried to talk Bil Herd (on site over the weekend) into firing up the V364 Prototype board that Bil had delivered to Rob at the show.  Rob talks more about the unit in his Youtube smoke test for the unit, but it was Bil’s dev board back in the day.

It’s not the same as being there, but here are some galleries to show what was on display and the participants who gathered in NJ:

14 thoughts on “Back from the Vintage Computer Festival – East 9.1!”